For many years now, I’ve been invited to accompany students from Jonathan Boone’s First Nations Studies class at the Bulkley Valley Christian School on a tour  that includes the homesite referenced in Canyon Creek: A Script. We travel a path following the Telkwa-Morictown Highroad (the old Bulkley Valley Road and part of the Collins Overland Telegraph route), dipping down to Canyon Creek, then up Jollymore Road to Jack and Elizabeth Joseph’s old cabin. From there we can look across a big swamp, some aspen bush to the fields below what’s known locally as the Baptiste Reserve, the place where one Wet’suwet’en, John Baptiste, successfully prevented eviction from his homesite.

Along the way, I usually pull out the 1913 township map, Canyon Creek Mary’s Wet’suweten family tree, a typed transcript from the 1915 testimony given to the Royal Commission on Indian Affairs by John Baptiste, Tyee Lake David, Big Pierre, Tyee Lake Abraham, Round Lake Tommy, Moose Skin Johnny and Jimmy Thomas, son of Canyon Creek Mary and Thomas (Jack Joseph is listed as the translator) and my notes from interviews done while writing the book.

We read the book together, point out features on the landscape (the path of the old trail the Wet’suwet’en used to connect their properties, the site of the burned-out house, the old root-cellar) and talk. Over those years, Jonathan Boone has made a tremendous effort to inform his mostly non-native students about the history of the Wet’suwet’en upon whose territory our community is built.

This year I was especially pleased to accompany students from the Moricetown
I Count High School on this, what is for me, a pilgrimage. 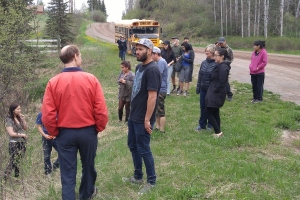 As we stretched out the very long genealogy chart, some of the students recognized family names. Others remembered stories about Jack Joseph’s capture of the bank robber.

We usually end our trip at the old Joseph house, still standing after, I suspect, more than one hundred years. Jack and Elizabeth had thirteen children altogether – let’s hope some of the kids had grown and moved out before the littlest ones came along! 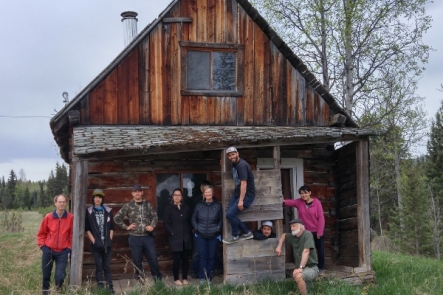 Things are definitely changing along the old Bulkley Valley road, slow as those changes might seem. Thanks to the staff and students for asking me to accompany them for a few steps on their journey.