Well, June is here and the creek is into its third and biggest freshet so far this year. Its roar fills the canyon and carries a freshet of cold air down from Silverking Basin. June is also the time of year when the phone calls from intrepid hiker Gisela Mendel would begin: the fairy slippers are in bloom, the clematis have appeared, the trail is open. And I’d (mostly) happily drop whatever chores I’d assigned myself to head outside with her.

I was by no means the only recipient of these calls. Mel and Evi Coulson sent me this contribution to the Driftwood Creek annals – the photos are from 20 years ago when the bunkhouse in the basin was still standing. The photos are theirs. Gisela died in April 2008. 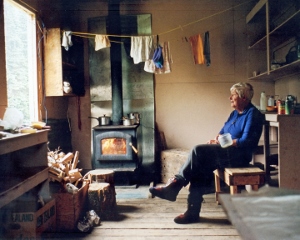 Gisela in the bunkhouse – 1996. Eileen Astin has done a painting based on this and will enter it in the Canada 150 exhibit at the Smithers Art Gallery.

Those early season camping and birding trips into Silverking Basin were initiated by Gisela. She was afflicted more than most with cabin fever and couldn’t wait to get up into the mountains at the first opportunity. She wouldn’t go on her own, but would prevail on victims to go with her, and that generally meant us. We have her diary for 1995 to 1997 (given to us by Rika) and she writes for 24th – 25th June, 1996: Silverking Basin with Evi & Mel Coulson (almost by force!)

This was long before the Joe L’Orsa cabin was built, of course. We slept in the old mine cabin, which had one room reasonably well fixed up, including a wood stove donated by RSF Energy. The problem was the porcupines. You could hardy sleep at night because of the sound of them chewing at the plywood underneath the cabin. One year a porky actually got into the cabin and, being the male in the party, I had to escort it out. I managed to shoo it down the central corridor, but unfortunately the door at the end was closed. So, with the porky trapped at the end and using an aluminum shovel to protect my shins (I was still in my pajamas) I managed  to reach over the cowering animal to open the door where it obligingly left. However, 2 hours later it was back underneath chewing away. 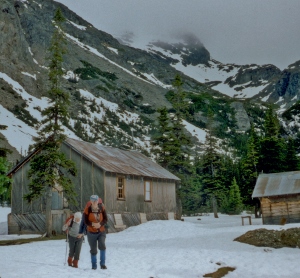 Gisela and Mel outside the bunkhouse in 1996. The old foreman’s cabin is to the right – the headwaters of Driftwood Creek up behind.

Most times there was still snow in the basin at this time of year, but with Gisela in command we always had full days. We would hike up to Silverking Lake or to Hyland Pass and glissade down the snow banks.  Birds were already active, with the Fox Sparrows, Wilson’s Warblers, Varied Thrushes and Golden-crowned Sparrows in full song. It was actually the 1996 trip when I recorded birds for my bird song CD, including the Fox Sparrow and Blackpoll Warbler. The latter is not very common and when we first saw it we thought it was a chickadee. Only when it sang did we realize otherwise. I always tried to record the Dipper, which has a lovely (and loud) song, but it sings infrequently and I never managed to get it.

I should also mention Gisela’s unique way of wading creeks. At that time there was no bridge over the creek at the entrance to the basin (the one draining Silverking Lake) and it was usually in spate with the spring runoff. She would carry 2 heavy duty plastic garbage bags and pull them over her boots and tie them up around her thighs. She would then wade the creek as quickly as possible so that if the bags tore there was little time for water to enter. If a bag was damaged, she would simply replace it. This was much quicker than taking off  boots and socks, which is what we did.

She was a remarkable lady, in fact one of the most remarkable people I have met in my life. Her diary is very interesting. Mostly it just lists the hikes she did (about 3 a week), who went with her and the flowers she saw etc, but occasionally she pens something quite eloquent, such as this entry:

Microwave trip – July 7th, 1995. We went down soon to escape the rain and I walked enchantedly through these upper blooming alpine meadows: early & late flowers all out, a magic carpet of delights. The older I get – now 73 – the more I enjoy the privilege of seeing those flowers. The more I realize how limited these physical endeavors to the alpine will be for me the more I delight in these wonders.