It’s been a tumultuous few months in Driftwood Canyon. About a year ago we began to think about moving to the coast. Back to Powell River, the town where I grew up. Indeed, back into the house where my mother still lives. Where I’m writing this now.

No one was more surprised than I was. For years I thought the farthest I’d move was the fifteen km into Smithers. Anyone who’s read my blog here, or my other writing, can’t help but know how much the Bulkley Valley has been part of our lives; I met my husband (t)here, our kids were born and raised (t)here, we’ve hiked and snowshoed the hills for over forty years, we have deep and richly satisfying roots (t)here. I agreed with Wendell Berry and Pete Seeger advising us to settle in a place and stick to it.

But priorities shift. And while obstinance is a familiar stance for me, I am adaptable. And my mom, approaching 95, lives in a large house beside the ocean. So here we are.

I cringe a little when people say something is meant to be. It’s nice when things fall into place, but I don’t believe there are forces in the universe re-arranging the furniture to open up new opportunities for you or me. But when we talked to the ducks, they lined up in a lovely row.  One day I met an acquaintance in the drug store, told her we were moving, and asked in jest, do you want to buy a house in the country? She looked at me funny and we both laughed. The next week she appeared on our doorstep with her partner; we had tea and showed them around. They began to arrange financing. And that was pretty much it: we had four months to choose what to keep and what to clear out from forty years of feathers, skulls, stones, nests, books, toys, letters, photographs, and internal combustion engines. We had four months to finish editing, designing and printing Creekstone’s latest book. We launched Song of the Earth: The Life of Alfred Joseph by Ross Hoffman at the Hagwilget Gathering Place the night before we left.

As for the signs:

The winter was long and cold.

A fellow whose property touches Driftwood Road decided to log down the steep bank right to the road, haul out a few truckloads and leave a mess for his neighbours to enjoy.

Another fellow had been logging on his property further up the creek; he wasn’t allowed to haul his logs out Driftwood Road, but the wetlands we snowshoed in for years are now islands within cut blocks.

The willows are dying; the beautiful scrub willows that have given shape to a landscape of straight trees – spruce, pine, aspen, birch and cottonwood – and made enchanting nooks and crannies and forts and benches of lichen-spattered bark, the host for the fragrant fungus that sets you sniffing at stray wisp of something like vanilla. The beautiful smell of willow burning in the stove. The willow borer has laid waste to them and their dead lie strewn across the steep canyon walls, just waiting for another kind of fire. 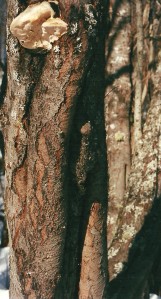 And then there’s the wheelbarrow. I’ve been rewriting the ending of my wheelbarrow poem for twenty years – and when we celebrated our fortieth year beside Driftwood Creek, it became “Forty years: one house, one husband, one wheelbarrow.” We’d had many discussions about what to take to Powell River. What to give to friends, to the thrift store, what to throw away. A week before the moving van was scheduled to arrive, we talked about that wheelbarrow. It seemed silly to take it; my mom has two. The next day, Lynn brought up a load of firewood and returned to the woodshed with the empty barrow. One of the handles fell off.  I’m not sure what that signified. A certain kind of obstinacy of its own.

Choosing to move didn’t mean it would happen. Or that it was meant to happen, as tempting as that thought is. I became particularly fond of the idea of unexpected connections years ago, reading parts of David McFadden’s Great Lakes Suite: A Trip Around Lake Ontario, first published in 1988, as well as A Trip Around Lake Erie and A Trip Around Lake Huron, both first published in 1980. McFadden always found significance in seemingly random occurrences. But perhaps find isn’t the right word. Perhaps create is more accurate. Which is what writing does, at least for me. Creates significance, meaning.

We’re here now and beginning to get our bearings. The harlequins we looked for this time of year in Driftwood Creek are floating right below my mother’s house. White-crowned sparrows that cleaned up under our bird feeders in Smithers forage under her shrubs. But the mammals we see are seals, sea lions, orcas, otters. The birds we feed are gulls and crows. And after all those years living in a canyon, watching the evening sun play across the trees down the road, we can stand outside and watch sunsets that go on and on.

23 thoughts on “Should we stay or should we go?”