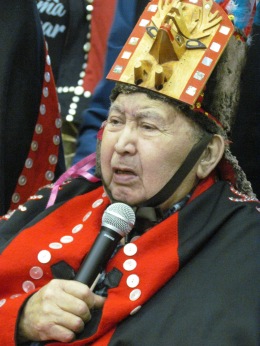 Wah Tah K’eght Henry Alfred died September 23, 2018 at the age of 84. He was the last of the Witsuwit’en plaintiffs in the landmark Delgamuukw-Gisday wa court case. Our home beside Driftwood Creek is right on the edge of his territory. Just over a year ago, I asked him and his wife, Wilat Sue Alfred, some questions about the Driftwood watershed. But this part of his territory had long been occupied by settlers, miners, and loggers and he didn’t spend much time here. While he’d been into Silverking once as a young man, he said, he couldn’t do it now. His kidneys were failing and he required regular dialysis.

Much of his personality showed through in that short visit. He told stories of his uncle Peter Bazil from whom he took his name. He cracked jokes. In many ways, he reminded me of my father and uncles – prairie farm boys – who couldn’t resist teasing, who told groaners, who worked hard and could fix almost anything.

Henry was in the hospital in Prince George for much of the following summer, while a group of Witsuwit’en and settlers and researchers worked with Tyler McCreary and Creekstone Press to get Shared Histories to the press. On September 8, Henry’s daughter, Marg Dumont, flew into PG and, after the day’s dialysis session, drove him to Witset so he could welcome the community to the feast his clan, the Likhsilyu, hosted to launch the book. We felt so lucky to have him with us – smiling and talking about the need for our communities to work together – after what must have been an exhausting day. He died just two weeks later. 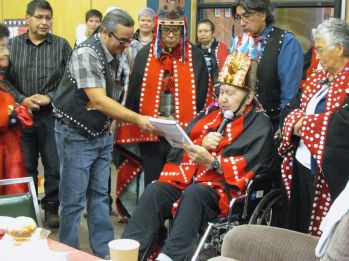 Ian Michell wrote in his memorial tribute to Henry:

Uncle Henry has led our clan and did a great job. He lived the ways of our Ancestors. The life of … both living off the land and in the boardroom has inspired me to mentor and try to live the old ways. Chief Wah Tah K’eght all of my life, my leader and grandfather in our Wet’suwet’en ways. Strong leader. Thank you.

Shared Histories author, Tyler McCreary, also wrote a tribute to Henry, one that was published in the Globe and Mail, a suitable honor for a man of Henry’s stature. It tells the story of how Henry acquired the knowledge that Ian respected so much, knowledge he took to the courtroom as an expert witness in Delgamuukw-Gisday’wa.

We went up the hill on his [Peter Bazil’s] line, the court transcript reads. Took us about four or five hours walking … he was pretty old. We went up pretty high. We sat down and have lunch. We made some tea and drank tea. For about an hour we sat there, and he pointed out to me … boundary lines in each corner.

But those names weren’t readily available to Henry throughout those preceding 25 years. I heard him on the radio tell the story of how he was having trouble remembering them until his day in court, when they all came back to him. When he needed the knowledge, it came.

After Peter died, Henry took on the name Wah Tah K’eght, in 1967. Taking responsibility for the name in the feast hall, Henry committed to protect the territories for future generations.

The story of Henry’s life reminds me of the life of Harry Robinson, an Okanagan storyteller, born in 1900 and dying in 1990. In Write it on Your Heart: The Epic World of An Okanagan Storyteller, a collection compiled and edited by Wendy Wickwire, she talks about where his stories came from. As a child he was charged with looking after his half-blind grandmother:

… and during their many hours together, she began to tell him stories which would later become the centre and meaning of his life. ‘Somebody’s got to be with her all the time. And when we’re together just by ourselves, she’d tell me, “Come here!” And I sit here while she hold me. And she’d tell me stories, kinda slow. She wanted me to understand good. For all that time until I got to be big, she tell me stories. She tell me stories until she die in 1918 when she was eighty-five.’

Other elders told Harry stories as well. But during the long years of his ranching life, years of hard work and responsibilities, he didn’t have the time or inclination to tell stories. “’I don’t care for it,’ he explains, ‘and I forget.’” But as a hip injury and old age slowed him down almost thirty years later, he began to remember: “’The older I get, it seems to come back on me. It’s like pictures going by. I could see and remember.’”

The link between caring for elders directly, a task which creates opportunities for knowledge to be shared, and becoming a repository for that knowledge seems clear. Henry’s life exemplified this. Tyler writes:

He was committed to taking care of the elders in his community. Living with his grandmother, he had supported her when she went blind. He also helped care for Peter Bazil, the son of his grandmothers’ sister and former holder of the name Wah Tah K’eght. Henry would bring him water and cut his firewood, and eventually brought him to live in the family home during the winters.

Many of the other tributes to Henry clearly illustrate the love he engendered. His daughter Marg writes:

Wah Tah K’eght didn’t tell us how to live, he lived, and let us watch him do it. Wah Tah K’eght was a man of few words but said so much with the look in his eyes and body language. You knew he loved you if he teased you. We always knew Wah Tah K’eght only went to Grade 4 but to us, he was our professor. A professor who knew so much about our ways, our protocols, our culture, our land, and our language. Dr. Wah Tah K’eght.

One of the links between these two men is their relationship to the land their people have occupied for thousands of years. Philosopher Julian Bagginni, in an excerpt from How the World Thinks: A Global History of Philosophy, reminds us that Indigenous relations to the land serve to “provide a corrective to the assumption that our values are the universal ones and that others are aberrations. It makes credible and comprehensible the idea that philosophy is never placeless; thinking that is uprooted from any land soon withers and dies.”

As Ian said, Henry was at home both in the boardroom and on the land. Our family and Creekstone Press feel honoured to have lived on his territory for over forty years.

Thanks to Harry Kruisselbrink for the above photos. 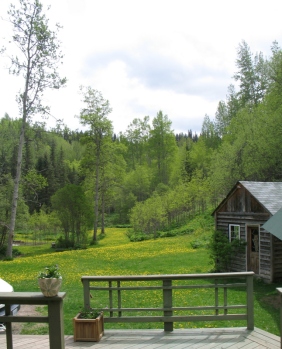