I had a wonderful walk in early September with Eileen Shorter who very kindly took me on the route where the Collins Overland telegraph trail and what later came to be known as the Bulkley Valley Road (now the Telkwa Highroad) crossed her property onto the Nageli farm. It was a beautiful fall day, the early fallen leaves marking the road, the old ditches a slight depression on either side. We walked to the edge of Driftwood Creek where we found some signs of an old bridge.

In an earlier blog, I wrote about the many ways  Driftwood Creek has been crossed; before the current bridge location (see pink dot) was used, the creek was crossed at the green dot, just where the Nageli farmhouse sits high above the road.

I don’t think that the remnants I saw match the bridge in the photo – it doesn’t look like the same crossing place. But it was definitely one of the bridges that crossed Driftwood Creek to connect the old pack trail from Aldemere to the Hudson’s Bay Ranch on its way to Witset and eventually Hazelton. 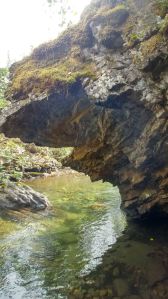 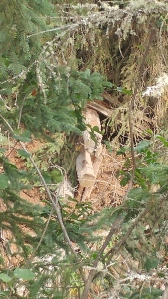 The bridge timbers indicate a crossing with one end on the downstream shoulder of the rock outcropping on the right and the other immediately below the Nageli farmhouse.

R S Sargent “staked” this land in 1898. This means he measured the land off the 1892 Poudrier survey posts and selected the best hay land he could. But he had to abide by the rules of the Land Office and “stake” 1/4 sections etc. But there was no ability for the Lands Office, presumably in Victoria at that time, to handle the request for land by the HB Co., so they were allowed to use the land without some government agent checking things out locally.

Of course Sargent chose land on the pack train trail, which was the 1866 Collins Overland Telegraph trail.

What Alan’s research doesn’t refer to is an earlier owner. A Witsuwit’en petition to the 1909 Stewart/Vowell Commission hearing in Hagwilget stated that a Witsuwit’en woman, Mrs. Leo, and her daughter Nellie (together with 10 cattle and horses) had been living at Lot 844 before this. Richard Overstall writes:

The records show that the main Bulkley Valley hay farms in the early twentieth century were originally developed and owned by [Witsuwit’en] families: the Hudson Bay Ranch on Lot 844 was known as Sesink’en and worked by Mrs. Leo and her daughter, Nellie; the Glentanna Ranch at Lot 861 was known as Dee’tsilyee and run by Peter Michel’s family…

I haven’t found out how or when the title shifted, but Stories of Swiss Settlement in the Bulkley Valley records that Herman Nageli bought the farm from Harry Zogoff in 1948. Herman and Anne’s second child, Esther, was born in 1962. “My dad had all kinds of stories about Harry, that maybe he had been involved in some way with the Hazelton bank robbery and if my dad looked in the right spot he might find something.”

She showed me the barn, which is the only one of the old Hudson’s Bay buildings still standing.

There was an old granary that had a beautiful wooden floor we liked to play in and this one snowy morning the roof was down … that’s where we had chickens and such, but my dad always called it the granary…there was a bunkhouse, there were barns when I was a child, and my dad knew some of the stories … a really old man arrived with his great grandson and he had worked there as a young child, maybe nine or ten years old, and he was doing a trip through the valley to remember his youth … I remember that we were enthralled that he had been there; he was this wrinkly little tiny old person.

On the left, the old farmhouse from across Driftwood Creek; on the right the logwork of the house is typical of many houses of the same era. The stonework in the basement dates from the original ranch.

So the location of the Driftwood watershed’s Hudson Bay Ranch is clearly established. But in the course of editing Creekstone Press’s latest book, Shared Histories, I found Witsuwit’en people refer to the Oschawwinna Reserve 3, a location much closer to Witset (Moricetown) as the Hudson Bay Ranch.

Wilat Sue Alfred told me the story of how her family had been moved from place to place as settlers took up land in the Bulkley Valley.

What happened is they were all south of Houston where my grandmother had territory – Sam Goosley Lake – they all lived there, my mother, my aunties, my uncles were all born out there on the territory – What they now call Buck Falls, Nilt tsi – means misty falls – they were all living out there and all of a sudden the government came in, they took them off the territory and they placed them in Glentanna and what grandpa’s family did, they cleared the land, huge land and they were going to build a log house, what did they do? they came again, and what they did, they put them in Oschawwinna.

Melanie Morin’s book, Niwhts’ide’nï Hibi’it’ën: The Ways of our Ancestors, cites Likhdïlye Russell Tiljoe’s memories of his father, Alec Tiljoe, wintering horses for the Hudson’s Bay Company there. When I spoke to Russell, he confirmed the story. His father and uncle, Antoine, ran pack trains for the Hudson’s Bay Company from Old Hazelton to Aldemere and Telkwa in the 1910s. His grandparents also lived there – it was in the Tsayu territory – Alec’s clan.

Out for a walk to Driftwood Creek’s confluence with the Bulkley River, I was trying to pinpoint the date we hiked up the old trail. I wanted pictures. It turns out, none of us had any, but a few minutes further along, right beside the creek, Jim Pojar spotted this hawthorn bush. Go figure!

In fact, the old Moricetown-Cronin trail passes through there, a trail that took people from Witset to Babine Lake along the back side of the Babines. And the name of the reserve, Oschawwinna, means prickly and refers to the black hawthorn bushes that grow in a clearing there – north of the Telkwa Highroad up toward Duckwing Lake. It’s the only place he knows of where it grows. (The plant, Cratageus douglasii, is more commonly found in the Skeena drainage). We walked through there years ago, trying to retrace the trail, and were entranced by the open meadow with the big prickly bushes in the middle. Alan Pickard writes:

In the summer of 1898 the HB Co. also allowed their pack train to graze and they cut hay on land claimed by the Witsuwit’en. This was the 160 acres that was or became Oschawwinna 3 reserve. This reserve was laid out by O’Reilly on 19 September 1891, and finally surveyed by E M Skinner in 1899. R E Loring was also involved with the layout of this reserve.

An August 31, 1898 article in the Victoria Daily Colonist states that the Hudson’s Bay Company

had cut some hay at a place beyond Moricetown, claimed by the Indians as a reservation, and the latter protested. The affair was at once brought to the attention of the department, with the result that it has been amicably settled, the natives being found right in their contentions, and the Hudson’s Bay company being ready to recompense them for the hay taken.

Since the place was already established as a reserve, the claims were heeded. However, claims for other Witsuwit’en homesites along the pack train route were not heeded. I’ve written about the people at Canyon Creek in my first book, Canyon Creek: A Script. In it, there’s a reference to Peter Michel, Wilat Sue Alfred’s grandfather. He made a claim to his homesite at Glentanna to the 1915 McKenna/McBride Commission:

Peter Michell ended up moving his family to Oschawwinna where they lived until the children were grown; then they moved to Witset.

I haven’t, so far, found any further mention of Mrs. Leo and Nellie at what became the Hudson’s Bay Ranch. The site is beautiful and would be a natural place to make a home – Cygnet Creek flows into Driftwood Creek at that spot and there would have undoubtedly been lots of open land around there to raise horses and cattle. Like many others, if their homesites were on land that had been staked by settlers, their claims were unlikely to be heeded.

Thanks to Eileen Shorter for taking me along the old road and to Esther Nageli for sharing some of her family stories (more on that later). And thanks again to Alan Pickard for his research.