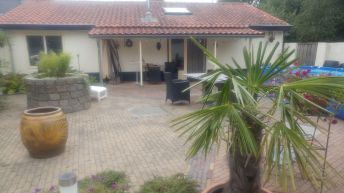 On a recent trip to Holland we went to the tiny village of Doornenberg close to where the Rhine/Rijn enters the country. Our very comfortable and quirky lodgings came complete with a full kitchen, living room, billiard table and garden as well as the usual odd artifacts these places seem to acquire: candles, handmade ornaments, oddly configured lamps, old video recordings and a jumble of cooking utensils. 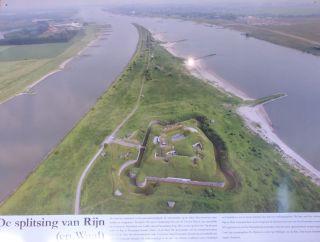 On our first afternoon we wandered down past Fort Pannerden to what I thought was the confluence of the Waal and Rhine. Which is where I got confused. We lived for over forty years beside Driftwood Creek in the Skeena watershed. The river flows to the ocean in a fairly accelerated manner with tributaries arriving along its way (the Watsonquah/Bulkley, the Zymoetz/Copper, the Kalum, Exchamsiks, Exstew, Gitnadoix, to name a few) until it reaches the estuary where sweetwater meets salt. I asked in all ignorance: where does the Waal come from? Where are its headwaters? Our friends looked confused. The Rhine divides here, they tried to explain and the Waal is one of the branches. I was so resistant to the idea that I claimed it was impossible. Sure, the Fraser River divides in its delta below New Westminster, but the divisions (or distributaries as they’re properly named) are called, simply, the north and south arms. And both soon enter the Pacific just a few miles from each other. The Skeena and the Naas don’t have any arms at all, as far as I know. And here in Powell River, the two rivers of any size are dammed.

I was also somewhat befuddled when we saw the lovely river Linge. It began just outside the back garden of our bed and breakfast. Ah, I thought, looking at the water overhung with branches. Are there springs, I wondered? I was still thinking headwaters. Headwaters, smedwaters. The Linge begins where a sluice opens in the “bank” of the Waal. The resulting waterway heads off placidly, finally flowing back into another distributary of the Rhine.  At about 100 km it is “one of the longest rivers that flow entirely within the Netherlands.” 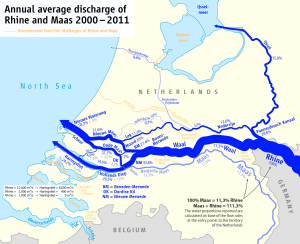 I finally realized that the Netherlands (the lowlands) is essentially a river delta. It seems that most of the water flowing through the country’s canals and rivers into the lakes of Holland and finally through to the North Sea, originates from the Rhine (where it originates is a matter of some dispute). About 6,000 km worth.  That’s navigable waterways. And if you’re trying to keep track of them, well, the names frequently change.

These waterways have been managed for hundreds if not thousands of years with diversions, bifurcations, canals, locks, and poldering. The connection between the Rhine and the Ijssel, for example, was supposedly built under the the direction of Drusus, a Roman general, c. 12 BCE as part of his military strategy against the local tribes. By 1961, about half of the country’s land, 18,000 square kilometres, was reclaimed from the sea.

Greta Thunberg arrived in New York days before we left for Europe. She gave her speech to the UN climate summit the day we flew (I know, I know) home to the clamour of our own election. We thought of the example the bicycle mecca of the world is showing. Holland is already raising the levels of many dikes and doing what it can to reduce CO2 emissions with electric bus charging stations, windmills and solar power. We saw solar panels on many of the houses, townhouses and barns in the villages we biked through. The country’s solar output doubled in 2018. It plans to stop all fracking in the Gronignen gas fields by 2022.

Listening to our politicians, it is all too easy to despair. I now live about two metres above sea level where the winds and waves regularly thrash the foreshore into new configurations. A rise of a few cms could change our relationship with this small plot of land dramatically. I just hope the determination and resilience of our young people continues to inspire us to actually enact change. I echo Rilke’s words written so many years ago (ca. 1900) in his Book of Hours:

and grant the churches and cloisters two.
And those that labour – maybe you’ll let their work
grip them another five hours, or seven,

before you become forest again, and water, and widening wilderness
in that hour of inconceivable terror
when you take back your name
from all things.