The sea lions have been going crazy off the point here – sometimes leaping right out of the water. The herring are spawning and for the first time in years, streaks of white signaling the milt the males deposit on the eggs appeared in Scuttle Bay. When we went to take a look, we noticed that the sign welcoming you to t’Ɩšosǝm (Sliammon) explains that the name itself refers to that milky water.

In Written as I Remember It, Elsie Paul describes the excitement about the herrings’ arrival, the richness they provided for the whole community of coastal life. “Like when the herring came in – it used to be around February and March, people are watching and ready and going down to the beach and really looking for – “Is it out there?” The seagulls are out so that means they’re here. And the word would get around. People are all hyped up and visiting back and forth and down the beach and it’s almost like you’re welcoming them.” (114) 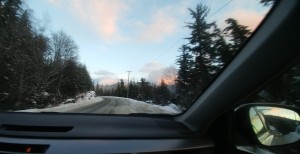 We’re still in our first year of transition here and word of the herring reminded me of last February’s snowy drive to Gingolx at the mouth of the Nass to the community’s Hobiyee, a celebration in anticipation of the return of the eulachon to spawn in the river.

Unlike herring, eulachon spawn in the farthest tidal reaches up large rivers like the Skeena and Nass – they used to appear from northern California to Alaska. One freezing spring we visited the eulachon camps on the Nass as the fishermen dodged ice floes to set their nets; another year they were drilling through two feet of ice, an outflow wind howling out of the mountains.

The location of the camps are vested in families, the resources to catch and process them shared. This is no work for a lone fisherman – the tons of fish harvested to create the ‘grease’ require a large and organized workforce. The oil rendered from the fish, through an infamous process of rotting and heating, was a valuable trade commodity for coastal people and fed people far inland. The trading routes were called grease trails.

I interviewed eulachon biologist, the late John Kelson, for an article I wrote several years ago: “Eulachon play a crucial ecological role. Offshore, they are a key link in transferring energy up to the higher predators we humans like to eat, such as salmon and halibut. They are the first fish to run in the spring at a time when food supplies have been low and many animals are gearing up for reproduction. They are like the gas in the engine of the estuary and forest ecosystem. A few meals of eulachon can increase the number of offspring in seals and sea lions, otters, eagles, gulls and other seabirds.”

A couple of weeks after our trip to Gingolx, we were at tide water on the Skeena along with thousands of gulls, hundreds of eagles, sea lions and seals.

The eulachon spawn in gravel, unlike the herring which, when they haven’t been fished to near extirpation, deposit their eggs on almost anything. Elsie Paul describes how they hung out cedar boughs in the milky water and the eggs would be deposited, then collected and dried. Further north, kelp laden with roe was gathered and preserved.

“Several years ago, they opened seine fishing in this area [1983/84]. This whole area was lit up front of the village from Sliammon to Scuttle Bay and towards Powell River, over to Harwood. There was all kinds of seine boats out there.  And they scooped the herring. We never did get herring after that.” (116)

Betty Wilson’s short film, Harwood, shown at the Powell River Film Festival, contained an even more dramatic image of the boats crowding into the strait, their gear getting tangled, and tempers flaring.

It’s no wonder those who spotted the milky water in Scuttle Bay were excited. And little wonder why so many are upset that DFO has once again opened the Vancouver Island herring roe commercial fishery. The herring play a similar role to the eulachon further north by providing food here for chinook salmon, the preferred food of the endangered southern resident killer whales. Humans are fond of the chinook as well.

Looking around Powell River at all the plants budding, the ducks donning their breeding plumage, the male mergansers spluttering and splashing around the females, the eagles sitting side by side, looking out over the strait, we all recognize and welcome what Dylan Thomas calls “the force that through the green fuse drives the flower.”

That force here on the northwest coast is fed at some fundamental ecosystem level by herring or eulachon and links us all.

… just a few hours after posting this piece, we walked south along the sea walk toward Grief Point. Sea lions were lounging in clusters, the water seemed to be foaming up and turning milky. As we continued it became more and more apparent, the spawn was happening here as well. The spawn drifted south all afternoon, the sea lions and seagulls filling the evening with their cries. 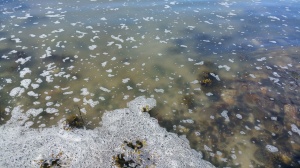 … today, the eggs on the low tide beach at Grief Point.