“As the majority of people infected … have no symptoms and are unaware of their infection, the virus may spread through a large population before even being recognized.”

It’s not about Covid-19; it’s a reference to Canada’s polio epidemic. Most people with the disease had no symptoms; about five per cent developed mild symptoms and less than one percent developed limb paralysis. Of those, five to ten percent died. Between 1949 and 1954 about 11,000 people in Canada were left paralyzed and in 1953 alone, 500 died, the most serious national epidemic since the 1918 influenza pandemic, according to the Canadian Public Health Association. 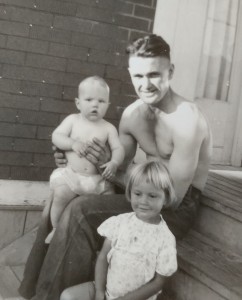 My dad with my brother and sister a couple of months before he got sick.

In 1953, about six weeks before I was born, my dad, a millwright in the paper mill here in Powell River, got polio. He had mild symptoms for several days, my mom says. “He’d be standing in the bathroom shaving, saying his neck hurt. I finally got the doctor who thought it might be meningitis.”

While Dad was hospitalized, Mom noticed he wasn’t moving one of his arms properly. His symptoms were classic. He was flown to Vancouver and put in an iron lung as muscle function in his lungs deteriorated.

My mother remembers standing beside a man, both of them looking in at their spouses lying in the iron lungs, the ventilators. The next day, the man wasn’t there and the nurses explained that his wife had died. 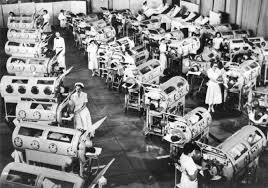 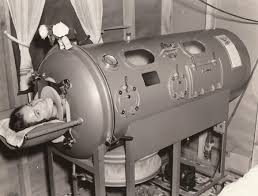 Mom and my one-year-old brother and three-year-old sister were injected with gamma globulin, an immune booster. There was no vaccine. I was born in December and six months later taken to see my father for the first time. My mom loves to tell me how the sight of my chubby red cheeks cheered him right up.

Dad lived, but he was one of the unlucky ones whose paralysis was permanent. It’s not like spinal cord paralysis that cuts off all feeling below the injury; the polio virus kills the motor neurons that activate muscles and they don’t regenerate. Rehab can bring some improvement and after about three years, my dad could walk, with support, and use his arms and hands. 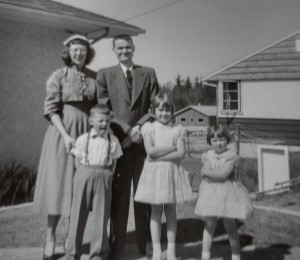 Outside our new house.

By the fall of 1957, he was able to move with us into the house he’d been building when he got sick. Mom had gone back to work teaching and we managed quite well. Dad was able to be home on his own during the day and he was there when we came home from school.

It wasn’t easy – he had a temper and would get very frustrated as he tried to get us to do chores around the house or painstakingly teach us to do something he could have done in a second.  But I suspect the tensions were no more than was normal in most houses. Our family activities were limited, but he found ways to extend his mobility. He had a friend build him a wheelchair made of copper pipes that was very light and easy to pack when we went visiting. One summer Mom drove us all in our Vauxhall station wagon to Saskatchewan to visit his family. I think she had just learned to drive. He encouraged her to continue with summer school courses and finish her education degree, and later to apply for a job as a school principal.

While Mom was at school one summer, Dad stayed at Pearson Hospital where he had spent time in rehabilitation. Many polio survivors had been there for years, some in iron lungs or rocking beds. We felt lucky indeed we could bring our dad home.

When we had a house built down here at Grief Point in 1968, he and a neighbour, also a millwright, designed its elevator. But less than two years later, he developed symptoms of post-polio syndrome, which no one knew much about then. He died suddenly in his sleep Feb. 11, 1970. 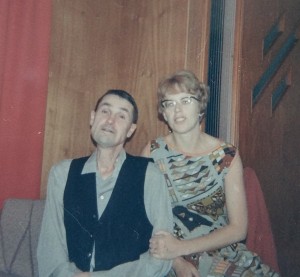 My father had a life beyond his wheelchair; he worked as a bookkeeper, he read, played bridge, and loved a good argument. He was also very aware of how people with disabilities were judged and taught us that labels mattered. Cripple was still a common name for folks like him; he hated it. He was a paraplegic, he insisted. Disabled. Today, we often imagine how much fuller his life could have been with an electric scooter and a computer.

As of today, there are over half a million confirmed cases of Covid-19 around the world and about 25,000 deaths. According to the Canadian International Immunization Initiative, at the peak of its spread, polio “paralyzed or killed over half a million people worldwide every year.”

I used to get upset when people didn’t vaccinate their kids because our family experienced directly what diseases like polio can do. Now, when people talk about how we’re over-reacting, about the low percentage of people dying from Covid-19, I’m even more frustrated. It’s easy to forget that each one of those deaths is a loss to families, friends and communities. 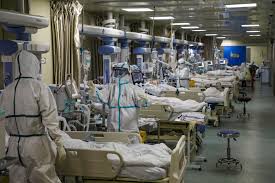 Seeing those images of rows of people in ventilators in ICUs, I can’t help thinking of my father. How much pain he must have felt, how afraid he would have been. We have been through this before and I say, bravo! to those (that includes all of us) trying to stem the tide flooding the world right now.