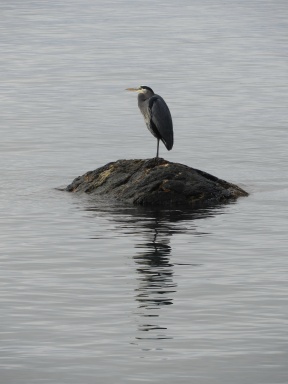 Hanging out the laundry in a grey, monochromatic morning of ocean, island and sky. I spun around at the blast of a humpback whale blowing not far offshore. Whoosh. Sheeww. A sound full of shshshsh. Two of them, grey backs curving up, the small dorsal fin in the rear, slipping back under. Another whoosh and another arc of grey. Again. Until the tail flukes rose to signal a long descent.

Our family had this house built beside Malaspina Strait over fifty years ago. I lived in it for two years plus one later summer before moving north to Smithers. I often walked the beach, smoked secret cigarettes sheltered in big piles of driftwood, dreamed of writing. There were sometimes orcas, but never humpbacks. Luckily their numbers have risen dramatically since the 1970s and we now see them regularly. And brant geese – I remember seeing those – as well as robins, crows, ravens, gulls and the occasional sapsucker.

Living in the Bulkley Valley, I learned to look more carefully at birds. And birds there were. Jays, nuthatches, chickadees, owls, ravens, waxwings, and the astonishing spring migration of warblers. Dodging rufous hummingbirds at the feeder, the underbrush quite literally a jungle racket. The melancholy song of Swainson’s thrush in the late afternoon. White and golden-crowned sparrows in the alpine. Invisible ptarmigan. Harlequins in Driftwood Creek. And always dippers. 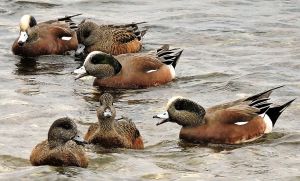 Just past the Squatter’s Creek confluence, a group of curious American wigeons with their pale blue beaks and the light stripe on the males’ heads. They paddled toward me as if waiting to be fed.  A heron huddled on a rock. A cluster of about twenty-five oyster catchers gathered on a boulder topped by a gull – likely a glaucous-winged, herring, or hybrid. Sparrows in the blackberry brambles and driftwood. The white wing flashes of two juncos. 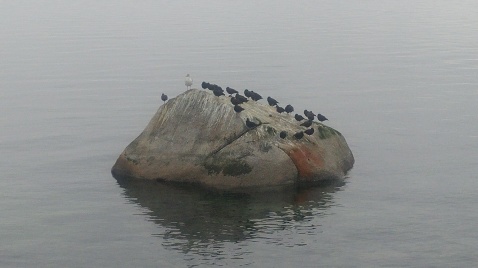 Next a big raft of buffleheads – the white males dramatic with their long black scarves flung over their backs; the females’ distinctive white cheek patches. They paddled together as if synchronized, then a quick lift of the neck and a tuck under into the neatest little dive. They were gone. A few seconds later, after gobbling some small crustaceans, they were back.

Just past the end of the sea walk, dozens of surf scoters, in close. Their exotic beaks, clear identifiers. Over toward Texada, a touch of mist. The water was so calm, so grey, the more distant birds seemed to float above it. They were there. And then they weren’t.

It was pretty quiet until I neared home: a killdeer wailed past, three crows at the tide line, two harlequins, a Pacific loon, and a red-necked grebe. A sea lion huffing and puffing,

North of town, the thrum of the paper mill seems the same as it was when we first lived here, but I don’t remember the bellow of dozens of sea lions, mostly Steller’s, hauled out on the barges and breakwaters around its old log pond. Their winter numbers in these waters are also increasing. I don’t remember them hanging around just below the house. Sometimes at night, we hear them through an open window. As my mother says, “There’s a lot going on under those waves.” And unlike the tracks we’d see in fresh snowfalls, the activity here leaves no trace except for a momentary disturbance of the water’s surface. It’s there. And then it’s not.

Thanks to Carol Reid for the photos.