I might as well name the American dipper (Cinclus americana) my spirit animal. I frequent streams, especially the “clear, rushing, boulder-strewn mountain streams, within tall conifer forests. [I]float buoyantly and swim on the surface (poorly) by paddling with unwebbed toes. [I] frequently walk about on the gravelly bottom of streams.”

Chunky, fairly nondescript, not very musical except for moments in the spring when it even surprises itself.

The dipper is our only aquatic songbird. It feeds on the little creatures that live in the water – caddis flies, mayflies, mosquitoes (whoopee!) and also dragonflies, worms, fish eggs and even small fish. In winter, it’s hard to believe there’s anything in that water, but if you can find  a pebble to flip, you’ll see little shrimp-like wigglers squirming for cover.

I’ve only seen two nests – one in winter when we snowshoed down the creek all the way to the Bulkley; the other, the parents actively attending to the chicks inside, was behind a noisy waterfall in the Rockies. The nests are always near, and usually overhanging, a mountain stream, but they are easy to miss because they look like a clump of moss. Under bridges is another good spot to look.

Males and females may work together to build the ball-like nest, often in freezing temperatures. Materials are dipped into water before being woven into two layers: one, an outer shell, 8-10 inches in diameter, made of moss, and the other an inner chamber with a woven cup, 2-3 inches in diameter, made of grass, leaves, and bark. Once the nest is finished, the mossy shell absorbs moisture and the coarse grass keeps the inside dry.

Every birding book and website says they are mainly solitary, that after a pair brings its chicks to fledge, the parents usually divide the brood and head off to separate territories. But this fall and winter, we’ve seen two and very occasionally three foraging within a few feet of each other. We find one almost every day.

Sunday was special. A grey and gloomy morning, the road an inch-thick crust of ice. At the first dipper viewpoint, I spotted one in a newly opened pool just above a big log jam. We watched each other for a while and then I looked up the creek to where our snowshoe track had collapsed into another pool. Another dipper. And then, further up again, a third one.

Another km up the road, at an opening where we always look but rarely see them, there was another. And on the way home, looking downstream from the bridge that crosses the creek just below a tiny stream flowing out of a trickle of little springs, springs that never freeze, a fifth.

The dipper. Industrious. Likes the outdoors. Tends to stay resident all year round. Enjoys poking around under rocks in creekbeds. Spirit bird indeed. Almost forty years of turning over stones, tossing them in and skipping them across Driftwood Creek. Listening for the bird’s sharp alarm call.

Last fall, my grandson and I were both hunkered down beside the creek 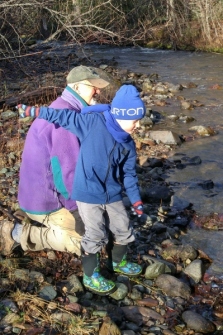 when I started telling him about dippers. Just as I had told his father and uncle more than thirty years earlier. How they dive under the water and walk around on the bottom, how they blend right in with the stones they stand on, how they squawk as they fly up the curve of the creek.

One popped out of a nearby pool and looked us over, tilting its head, one eye zeroing in. The white eyelid. It hopped closer and closer. I held onto my grandson’s arm, stopping the pebble he was about to throw. We all watched each other for several seconds, me doing the little bobbing dance we always do when we see one: dip, dip, dip, dip, dipper!

The boy’s shout of laughter made that moment even better than a five dipper day.

(Thanks to Uncle Dan for the dipper photographs)

After reading this post, Mark Tworow sent this lovely reminder of summer and the creek in a completely different form.

I’ve attached Driftwood Creek in the Summer, one of the largest paintings I’ve ever done. (48 x 72)

If you walk from the summer parking lot towards Sunny Point there’s a a small climb down a rocky slope to this pristine view of Driftwood Creek. The painting at such a large scale hoped to capture a small part of the feeling one has of this beautiful crystal clear creek tumbling around the water smoothed boulders. How many years has the creek flowed through here? The smooth boulders give a small answer, though the course of the creek has probably changed through the years. If you pass this place one summer, stop and pause here. It is a full place.

I think you might likely spot a dipper here too.

You can tell Mark that dippers live, fly and dive all along the Driftwood

corridor…and yes indeed right downstream from the location of his painting by a place some locals refer to as Zen Rock.  I was lucky enough to catch one of them with my camera a couple of winters ago.