Thanks to Lynn Shervill and Hans Tugnum for putting this piece of history together.

Today folks accessing the Babine Mountains via Driftwood Creek can be forgiven if they fail to notice the several log-hauling roads branching off the creek below Sunny Point. Alder thickets, devil’s club and wind falls have obliterated them. But 40 years ago, when my wife and I moved into Driftwood Canyon, they were obvious and each ended in a sawdust pile and a story of enterprise, hardship and, sometimes, tragedy.

Working up the creek from the winter parking lot (just above the third bridge crossing of the creek on Driftwood Road), there were a couple of mills on the bench above the true right side of the creek. One was owned by George Sharpe and Louis Wick and the other by Emil and Steve Mesich.

The next mill, owned by Bill Hickmore, was located between the third and fourth bridges,  and there was another one, again to the north of the creek,  just above the fourth bridge.

We often roamed through these old sites, cutting firewood and wondering what life must have been like for the people who lived and worked here. Maybe not so bad, we thought, having once found a decaying piano at the site near the fourth bridge. It was at this same location we managed to bury a neighbour’s borrowed pickup to the axles at the edge of a sawdust pile, sawdust we wanted as mulch for our hand-watered garden.

Smithers rancher Bill Morris had a mill just above Driftwood Creek on the Lyon Creek Trail, the remnants of which are still visible, and Onie Leighton ran mills part way up the Harvey Mountain Road, just past the fifth bridge, and at Sunny Point.

Between the end of World War Two and the mid to late 1950s there were almost a dozen bush mills along the creek, each cutting from 2,000 to 10,000 board feet of lumber a day.

According to Hans Tugnum, whose family emigrated from Switzerland to the Bulkley Valley in 1936, there could be six sawmills operating along the creek at any given time, employing 40 to 50 people.  A typical mill crew consisted of one or two fallers, a skidder using horses or a cat, a sawyer, a slab packer, who disposed of the outside cuts in a fire pit, a swamper (labourer) and a cook.

Top price was $35 per 1,000 board feet of prime spruce or pine two by 12s or two by 10s, according to Tugnum.  Two by fours and two by sixes went for about $30 per 1,000 board feet. Mill owners – men like the Lubbers brothers, Jake Zust, Ralph Dieter, Al Fletcher, Jack Thomas and Danny Lemire – sold their lumber to a local buyer such as Gordon Jewel of Northern Interior Forest Products in Smithers where it was planed before being shipped out by rail.

Mill employees were often paid according to daily production, say $3 per 1,000 board feet. If the mill was producing 5,000 board feet a day, the employee would get $15 a day.

Tugnum, who owned a mill located between the Driftwood Creek corridor and Old Babine Lake Road, said employees lived on site in bunkhouses and worked from 8 am to 5 pm Monday through Friday. “Supper,” said Tugnum, “was served in the cookhouse about 6:30 or 7 and then the guys would return to the bunkhouse to BS or play a little poker.  About 8:30 or 9:00 cook would leave a fresh pot of coffee or tea on the stove.”

On Saturday the crew worked until noon and then headed for home and their families. “And yes,” said Tugnum, “some of them headed for the bar. But they were on their way back to camp on Sunday afternoon or evening.”

It was good work, according to Tugnum, that paid reasonably well. But it could be dangerous. “George Sharpe was killed when a slab flipped the wrong way, was kicked back by the saw and hit him in the head.  A cat driver working for Onie Leighton was killed at Sunny Point when his machine rolled on him and another guy, working for Bill Morris, was killed when a tree fell on him.”

Safety standards, according to Tugnum, were non-existent. “You took what you got,” he said. “The mill owners paid into the workers’ compensation but there were no safety rules.” 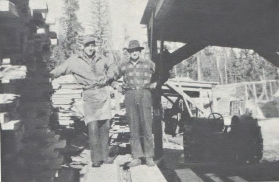 Tugnum said there were probably 100 small bush mills in the valley like the ones on Driftwood Creek during the ten years after the war. But then it slowly came to an end. More restrictive BC Forest Service regulations and big industrial mills, like the one in Houston, made it impossible for the little guys to keep their books in the black.

“Bowater & Bathurst bought Harry Hagman’s big mill in Houston,” Tugnum said. “And after that all the timber started going to Houston.

Ralph Dieter contributed to many a musical evening all up and down Driftwood Creek, including at our place. This was taken in 1983.

Another mill owner, the late Ralph Dieter, who operated three different mills during the 40s and 50s, said the big mill owners bought up all the quotas held by the independents. “They spent millions just buying people out. They’d offer almost anything to get rid of you.”

The last logging operation on Driftwood Creek – a small clear cut in the fifth bridge area – was done by Tony Mesich in  the mid-1970s, just about the time work started on creating the Babine Mountains Provincial Park. For many years, we could still drive up the road and happily picked huckleberries there, often meeting the Yeker family. Like many of the other roads, it too is long lost to sight.