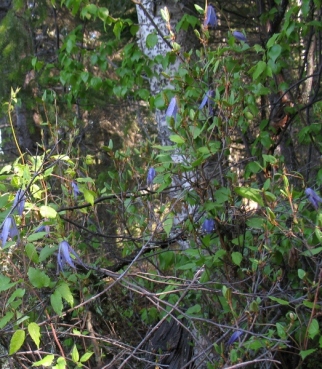 Every June, we used to walk along the ridge above Driftwood Creek from Hans Tugnum’s gravel pit on Gilbert Road to our place—often with Gisela Mendel and Nancy Leighton. We were always on the lookout for clematis, warblers and bears; the clematis likes the brush under the spruce trees, the warblers like the sunny slopes and the bears like the anthills. We didn’t really know Hans and Emily then (though one of his foster daughters, Brenda, became friends during my writing of Canyon Creek: A Script as Elizabeth and Jack Joseph were her grandparents). But Hans is one of those neighbours you realize you can go to when you need to check the facts about local history. Since researching his story about Driftwood Creek bush mills, Lynn has spent time time with Hans and, if you’re a local history buff, you’ll recognize many of the names that come up in his story below. 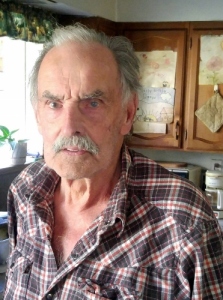 The headwaters of Driftwood Creek are located at one end of a glacier in a col high above the old mine workings in Silverking Basin. The other end of the glacier drains into the Reiseter or Twobridge Creek watershed. Within these two watersheds Hans Tugnum, who emigrated at age six from Switzerland to the Bulkley Valley with his family in 1936, has spent more than 80 of his 87 years.

Hans’ parents, Conrad and Walburga (Wally), bought property at Glentanna where the Telkwa High Road and Snake Road intersect, a site by then rich in Bulkley Valley history. Prospector Danny Moore built a roadhouse there in 1904 and George Duhamel, a Yukon Telegraph lineman, built a second roadhouse—Glacier House—about a quarter mile closer to Moricetown on the High Road.

An adjacent property, the Chapman ranch, was staked by Peavine Harvey in 1903, owned by mining promoter James Cronin (Cronin mine) and operated by Charlie Chapman for whom Chapman Lake is named. The land was later purchased by Mike Mesich, father of Emil, Tony, Tommy, Steve and Kitty Mesich.

Conrad bought his property (Lots 861 and 862) from the Lapadats and lived in the roadhouse built by Danny Moore. He dismantled that place and built a new, squared-timber home in which the Bill Brandsma family now lives. According to Stories of Swiss Settlement in the Bulkley Valley, Conrad had a mixed farming operation that included hay, grain crops, pork and dairy and beef cattle.

Other neighbours over the years at Glentanna included George Sharp, Matt Mackenzie, the Sturzeneggers, the Veenstras and Hark Vandermeulen.

Hans, along with brothers George and Florian and sister Margrit, fed or milked cows before and after school, cut firewood and helped in the kitchen. During the day they attended the Glentanna school. According to Hans, he started school in 1937 under the tutelage of Della Herman (nee Carpenter). She was followed by Florence Lundstrom and a series of other teachers including June Fletcher (Al’s wife and Della’s sister) and Anna Morris (nee Edmonds).

Some of Hans’ classmates included Johnny and Annie Lapadat, Helen and Irene Oulton, and Ernie and Otto Zust.

“Many of the kids, like the Malkows and the Lundstroms, had to walk three miles or more to school,” Hans said. “On the weekends we went exploring, hiking, squirrel hunting or horseback riding. There were very few cars then so mostly we just visited with one another.”

Hans quit school when he was 15 and stayed working on the farm until he was 25.

“Then I partnered with Hark Vandermeulen and we ran a sawmill on crown land up Twobridge Creek.”

For much of the next 10 years Hans lived either in the bush or at a property on Dieter Road and ran sawmills, one of them located off Old Babine Lake Road near what is now the Rabbit Road. He said a typical operation consisted of a bunkhouse and cookhouse, the mill and about eight employees. “Between Houston and Hazelton,” he said, “there were at least 100 bush mills.”

Just about the same time he started in the sawmilling business Hans married his wife Emily. “I met Emily in 1951,” he said. “We were on and off, mostly off, for the next five years. But I was persistent and we got married in 1956. We lived at Dad’s for about three years and then in the bush after that. She was my camp cook and a damned good woman.”

Together they raised six children—one of their own, two adopted children and three foster children.

The view from the ridge walk from Tugnum’s along Driftwood Road.

Hans quit the sawmilling business in 1966 after being injured in a car accident. In 1973 he bought his current property which borders Driftwood Creek just off Gilbert Road, spending time with his growing family and close friends such as the late Oscar Pederson, who started coming to the valley from Saskatchewan in the 1940s to work in the bush mills, and with Ronnie Gilbert, who was born in the valley.

Ronnie, Hans and friend Bev Brinkhurst built a snowmobile trail from Ronnie’s house on Dieter Road all the way to Smithers Landing on Babine Lake. According to Hans it took the “old guys” about eight hours to make the trip “but some of the younger guys could do it in five or six. We’re too old for that now and the trail is overgrown anyway.”

A director of the Bulkley Valley Credit Union for many years, Hans is now working with the Smithers Co-housing Association.

“The idea for that,” he said, “is to get back to the way it was … visiting, helping each other. To have a sense of community again.”

Thanks to Lynn Shervill and Hans for this story.