If you’ve ever been to Smithers, you’ll have seen the man blowing the alpenhorn at the highway end of Main Street, you’ll have seen buildings faced with white stucco, false shutters stenciled in floral motifs,  decorative balconies, and pitched roofs – all the result of an official alpine theme adopted by the town in the nineties.

Why the alpine theme? Well, the mountains, obviously.  And those picturesque dairy farms dotting the surrounding rural landscape. Sure. But, really? A little Switzerland motif smack in the middle of Wet’suwet’en territory? Seems crazy.

But I have to admit, it doesn’t seem to have ruffled any feathers. Both the Office of the Wet’suwet’en and the Dze L K’ant Friendship Centre offices follow the guidelines.

Which all goes to show that the Swiss immigrants, who mostly arrived in the mid-thirties, have maintained a strong cultural presence in the community. And a strong presence in the Driftwood watershed. A survey of the early owners of rural properties within its drainage includes the L’Orsas, the Nagelis, the Sturzeneggers, and the Tugnums. In fact, they are all still here, the Nagelis and Sturzeneggers still raising cattle. But they weren’t the first. In 2006, the Bulkley Valley Swiss Club published Stories of Swiss Settlement in the Bulkley Valley 1910-1960. The first entry tells the story of Walter Faeh – I’ve reproduced much of it below, with their permission. 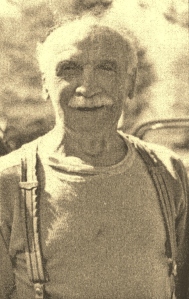 Walter Faeh was the first Swiss known to have settled in the Bulkley Valley. He was born in Basel on 19 November, 1887. After attending a commercial college there, he started a career in business. However, he was not born to earn his living in an office. In 1909 he left for Canada and found a job on a farm in Saskatchewan, where he worked very long hours for $10 a month. When word reached him that railroad construction labourers were getting 15 cents an hour and only had to put in a ten-hour day, he packed his bags, walked four miles to the railway and flagged down a train. In Saskatoon, he was hired on a Grand Trunk Pacific Railway construction crew. He soon found his way to Vancouver after stops in Edmonton and Calgary.

In 1910 he took a boat from Vancouver to Prince Rupert, where he boarded the newly built sternwheeler S.S. Inlander and steamed up the Skeena River to Grand Trunk Pacific construction Camp 166, where he worked for a few months. There were still about four years of railway construction to go before the last spike was driven in April 1914, and Walter could have been employed for some time if that had been his wish, but he had heard about the excellent farm lands being made available to settlers in the Bulkley Valley and that is what really interested him.

He was soon on the move again. He walked upstream along the Skeena River, presumably on the newly surveyed rail right-of-way, to about Skeena Crossing. There he found a Native who rowed him across the river for fifty cents. The following day he walked to Sealy Landing where railway contractors Foley, Welch and Stewart had a large depot and construction camp. In the barber shop Walter mentioned his intention of taking up land in the Bulkley Valley, and the barber offered him a quarter section there that he had optioned. For $100 the barber would cancel his option and Walter could file on it. Walter decided to investigate, walked up to the mouth of the Bulkley River, crossed on the ferry to Old Hazelton and visited C.G. (Peavine) Harvey’s real estate office, where he saw that most of the best Bulkley Valley land had been preempted. He decided to take the barber’s offer. The final cost of this quarter section (Lot 1182) was $300, because Walter was obliged to pay the government one dollar per acre, plus 25 cents an acre for the legal survey. Additional conditions of the preemption required that, over three years, he had to make certain improvements to the property and reside there six months each year. When those conditions were fulfilled, he would receive a deed to the land.

Around Christmas-time Walter bought about 1,000 pounds of supplies and equipment at the Hudson’s Bay store in Hazelton and had the load transported to the Cronin ranch (Lot 859) at Glentanna for $20. He apparently accompanied his outfit and packed the supplies down to Joe Matus’ place (Lot 855) on Driftwood Creek. From there he had to find his land, which he did by following the new survey lines to the northeast corner of his Lot 1182, where he constructed a rough shelter and stored his things. After exploring his property, he chose a good place to build a cabin. After a few days, Joe Griffin came down to see if the greenhorn was frozen yet, because the temperature was about 40° below zero. Not quite, but a few days later Walter froze a big toe and had to move into Matt Malkow’s cabin on an adjacent homestead, which was empty for the winter.

In the spring of 1911 Walter built his first cabin. When he needed supplies, he had to walk to Aldermere (about 18 km) or Hazelton (about 65 km), until the railway was constructed through Smithers and the townsite was established in 1913. Snake Road, which went past his farm, was also constructed about 1913. Walter spent his summers clearing land, erecting farm buildings, haying and fencing. He eventually cleared about sixty acres of land, all by h 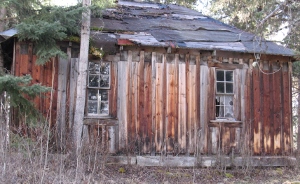 and. He used the cleared land to grow hay, which he sold, saving only what he needed for his team of horses. When the Swiss Settlement Delegation visited him during their survey to determine the suitability of the Bulkley Valley for Swiss settlers, he is reported to have pointed to his modest hayfield and said, “There, twenty-five years of hard work.” Walter was, at times, hired on as a faller in a logging camp during the winter, and he worked underground at the Telkwa coal mine in 1943.

Walter never married. He seemed to be a perfectly contented bachelor. His only known vice was an addiction to Copenhagen brand chewing tobacco, or “snoose” as it was called. In addition to farm work, he spent much of each summer prospecting for mineral deposits, using a pendulum as a guide. He found coal along lower Driftwood Creek and did a considerable amount of work on that prospect, but he never found anything that he could sell. Walter enjoyed being out in the hills, and it is doubtful that he really cared whether he found anything of serious economic interest or not. He was quiet and unassuming, with a sparkle in his eye, a ready chuckle and a philosophical optimism that made him a well-liked and respected member of the community. He was very much a free man. He dressed very well when he went to town. He did not own a car. He walked to town or caught a ride with a neighbour or, when Wall’s Taxi used to make the Glentanna-Driftwood loop on Saturdays, he joined Bill Bruce and others and paid 50 cents to go to town that way. He had no telephone, no electricity, no running water and no debts, and that was just the way he wanted it.

In the mid-1970s Walter sold his farm to Leroy Taylor, but he still lived there during the summer. He started spending the winters in Smithers in the Bulkley Hotel, accompanied by his friend Bill Bruce. He tried one winter in Vancouver, but he did not like it enough to go back again. Eventually, he moved into the Bulkley Lodge extended care home in Smithers, where he enjoyed the companionship of many friends and the luxury of someone else doing the cooking. Walter passed away on 8 October, 1984.

Bill Metcalfe, an old friend of ours, lived in Jim Briggs Sr.’s  old farmhouse across the road from the beautiful driveway leading through pasture and aspens to Walter’s cabin. When he took us for a walk there more than 35 years ago now, we went right down to the river where the underbrush opens to the wreck of an old cabin in a clearing beside the Bulkley, between its confluence with Canyon Creek and Driftwood Creek. It is one of the most beautiful pieces of property in the valley. Leroy Taylor lets us walk or snowshoe through there every couple of years.

Just last week Leroy told me the story of a man who owned the clearing. He grew potatoes down there (it used to be land right down beside the river would have about two more frost-free weeks on either end of the growing season, Leroy says, but that seems to have changed now) and would haul them up every fall to sell. One year an early frost killed them all so he packed it in and sold the land to Walter. The property came to Leroy when he bought Walter’s place.

“Come spring Walter would go out and cut down some poplars and haul them over to his cabin. When he had enough firewood to get through the next winter, usually in May, he’d start doing his prospecting – he went all over the place doing that.”

The Briggs’ place is gone now – and Walter’s cabin is beginning to fall apart. But it’s positioned in such a way to tell the story of a man with an unerring sense of beauty, his windows looking out across a hard-won clearing to the mountain across the river. And still with plenty of space for the most restless of spirits. 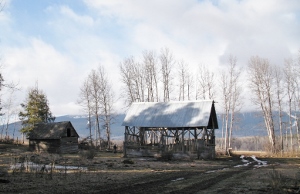 2 thoughts on “Walter Faeh – above the mouth of the creek”