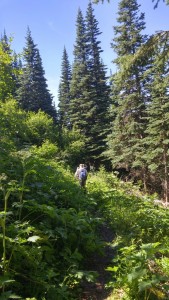 I first set foot on the McCabe trail in 1977 or 1978, can’t quite remember which. Joe L’Orsa took a group of us (including Walt Taylor, Mike Morrell and his son Tomas) up the Lyons Creek trail to the lake just above its headwaters where some of us swam. We then dropped down on what is now called the Blix trail until a tiny path emerged out of a wet meadow full of flowers. Mike and his son went right to follow the McCabe trail to its summit above the Little Joe lakes; the rest of us turned left to follow the trail down to Sunny Point.

This was not yet a park and there were no signs signaling trail heads or route distances. But we had Joe who grew up travelling in these mountains with his family. At the hike’s beginning, he stopped just below the Lyons Creek trail entrance to show us where the trail originally began. It used to be called the Gale & Lifton trail and was, he wrote in his unpublished A History of the Babine Mountains Recreation Area, “already considered an old trail by 1921. It may have followed an ancient Indian entry route, possibly into the marmot ground near Ganokwa Basin.”

We passed the old sawmill site, the remnants of which are still visible, and struggled up the hill to the long central stretch where the climb abates for a few kilometres. The trail was often muddy and not always clear. Joe was very patient as we struggled towards treeline. Hiking was still new to me and I suffered from the delusion that if you sweated and struggled up steep inclines swatting mosquitoes, you weren’t having fun. 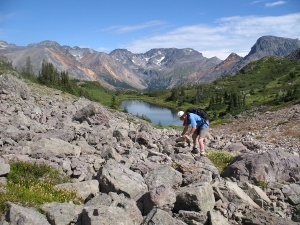 Once in the alpine, we followed the trail around to its junction with the route leading over Padella Pass and turned left to follow the creek up to the lake we call Number Six Lake (if you look down from Harvey Mountain you can see a six or a nine clearly drawn by the lighter sediments on the lake bottom). The shintangle almost obliterated the trail up the creek, and the route down was equally sketchy. It was hard at the time to believe Joe’s stories of taking horses down there. It’s still hard. 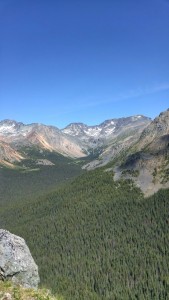 Once on the McCabe trail, we had a pleasant walk out though I don’t remember much of that specific trip. When I think about how many times we’ve walked it since, the years blur together. We often take visitors up to a lookout point where you can see across into Silverking and catch a glimpse of the cabin there. The dramatic drop is stunning and we almost always see goats. 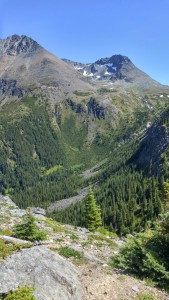 According to Joe’s research, the trail was built in 1919:

The famous McCabe trail was constructed, from the wagon road below Sunny Point, along the backside of Harvey Mountain, to the Copper Lakes area. This trail was built – or caused to be built – by Red McCabe, on a trail grant under the provision of the Mines Development Act.

Red McCabe didn’t get his name from the colour of his hair: he was the president of the local chapter of the old Socialist Party of Canada and prospected with two other party members – Pat McPhee and Jim Carson.

McPhee had been prospecting in the area for at least fifteen years by then. Joe describes a trip taken in 1905:

Provincial Mineralogist W. F. Robertson makes a major trip from Quesnel to Hazelton. From a camp at the Hudson Bay Ranch in Driftwood, he visits the Babine Range, with Pat McPhee as a guide. Apparently they went up what is now the Lyons Creek Trail and visited the … claims on what is now known as Harvey Mountain. 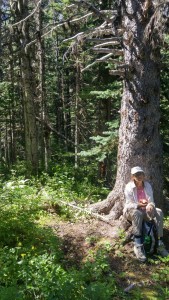 Jim Carson had a camp just above the bridged creek that crosses the trail below its opening into the boggy meadows where the Blix trail takes off.  Joe showed us the remnants of his camp as we walked out. The only evidence now is a wire scar left in a big spruce tree where he pitched his tent. (Carson Basin, a long gentle slope on the north flank of Pyramid Mountain, is also named for him. If you poke around up there, you’ll find lots of old adits.) I’ve been told Axel Elmsted, another longtime Babine Mountains prospector,  used to call the mountain Bolshevik Hill because of the three men’s political affiliations. 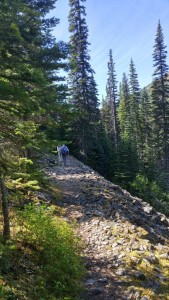 After crossing several brushy slide areas, the trail further down traverses a big rock slide that pre-dates its original construction. If you stand on it and look down, you’ll see just below another path crosses the rock – this is the trail that leads down to the spot on Driftwood Creek where the engineers who surveyed the trail (hence it’s pleasant grade) camped. More on that another day.

Tony L’Orsa, Joe’s older brother, still remembers when the McCabe trail was wide enough to be the wagon road instead of the narrow path it is today. There used to be a cabin not far from Sunny Point which was burned down by the forest service, he said. Later exploration tore up the original trail’s beginnings, but it remains one of the most scenic routes into the Babines and, on its lower reaches, provides splendid views across the upper Driftwood watershed.