Lynn and I have, for many years, hiked with friends who are up for almost anything—and who will set out under almost any circumstances because you just never know. That fog might lift, that threatened rain might not materialize, there might be an inversion that raises the valley bottom -25° to something more pleasant.

The view from Harvey Mountain looking down at the junction of the creeks.

Here at the cusp of winter, it’s especially hard to adjust. To stuff the down jacket, the warm mittens and the toque into a day pack that’s already fat enough. To be sure to carry a headlamp because it gets dark so damn early. But good hiking companions won’t quail when you ask them to join you on a little bushwhack, a little probe. Karen Diemert and Jim Pojar took the bait when we told them we wanted to try to find an old cabin built in 1936 by Al Fletcher* and his brother Edison on the banks of Driftwood Creek just below its confluence with what we have now named McCabe Creek.

You won’t find that name on any map, but if you’ve walked along the north side of Harvey Mountain you will have seen it. It is created when a triplet of creeks—one that runs out of two little lakes on the south end of Hyland, one that runs out of Copper Lakes on the McCabe Trail and one that runs down the headwall between the two—join forces to make its way through some wet meadows to join Driftwood Creek below Silverking Basin. 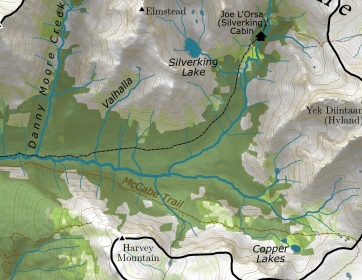 Our Gilbert Road neighbour George Loset—George has done more solo exploring of the Babines than almost anyone alive—directed us to drop down to Driftwood Creek where Valhalla Creek crosses the Silverking trail and follow the creek upstream. When he was last there, close to 40 years ago now, he found an old horse track and Fletcher’s cabin, its roof caved in but otherwise intact. He also snowshoed up into the meadows, a route he said the prospectors took in winter to avoid the avalanche chutes crossing the McCabe Trail. That was the route, he said, that Ralph Dieter, Ben Nelson and a policeman took when they packed out the body of Martin Cain, who died on a snowshoe trip into Little Joe where Axel Elmsted was “living a hard-working, solitary life … working in the tunnel alone.”

It seemed like now or never. We could still drive to the summer parking lot, there was just a skiff of snow in the bush and that could all change in a week or two. Plus there was a little window of clear weather. 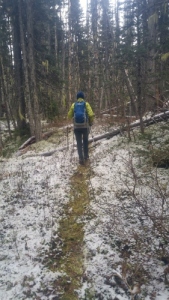 Valhalla Creek crosses the Silverking trail just above the four km marker. We were ready to get soaked in the underbrush, but the descent was dry—our boots sank into the frozen moss, the few deadfalls were easy to skirt. Just a few minutes and we were there. We stuck close to the creek until a tangle of downed trees sent us higher where Jim spotted the remnant trough of the trail outlined by the snow. We found a few blazes on the trees, but nothing clear enough to guide us when the trail lost itself in the underbrush.

When the current road was driven into Silverking in 1946, the old trail was likely only used if Fletcher was trapping or perhaps guiding hunters—in 1949, he was given the first guiding license in the Babines and his third client killed the goat that set the Boone and Crockett record and is memorialized near the junction of Highway 16 and Main Street. Now that the mountains are protected, signs of the older uses—the mineral workings, cat trails and sawdust piles—are disappearing back into the bush. As is Fletcher’s old cabin. 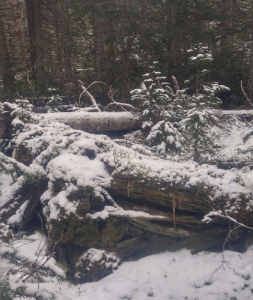 We had dropped back down to the creek after losing the trail and there it was, an insignificant heap of logs, the sawn ends still visible, a few lengths of stove pipe and one lamp. A small flat spot near the creek but high enough to survive any big runoff events. Dark though.

One success. The confluence, George had told us, was nearby. Steep banks and more deadfalls sent us up away from the creek. We were getting ready to give up and look for a good lunch spot in the sun dappling the moss when Driftwood Creek made a hard turn north. A beautiful little esker, all green moss, led us back down and sure enough, there was the tributary joining the main flow.

As we stood there, jubilant, two dippers flew down Driftwood Creek and paused, chattering and bouncing at the confluence. The first we’d seen in months.

It was enough. Those alluring meadows were on the other side of a very cold creek and a rocky scramble up into who knows what. We already had a few hours of hiking remaining, first finding our way up to the Silverking trail and then back down to the summer parking lot. Another time perhaps.

*Al  Fletcher was our neighbour for several years. He lived on the ranch his parents, Eli and Laura, homesteaded in 1913. The year he built the cabin, he also registered a trapline, one that had been registered in 1926 to Peter Bazil or Wah tah K’eght—and the trapline, which followed Driftwood  Creek up into Silverking, was in his territory—now that of the current Wah tah K’eght, Henry Alfred. That’s another story I hope to chase down.

7 thoughts on “The McCabe Creek probe”