Harry has lived in Smithers since soon after his family arrived in the Bulkley Valley in early 1951. He served on town council for many years and was a dedicated environmental activist and researcher. He is a wonderful photographer (the photos here are from his collection) and has helped record local history, working with Lynn Shervill on Smithers: From Swamp to Village and writing his own Smithers: A Railroad Town. He is also a great friend. Like many of us, he can’t help returning, year after year, to the beautiful Silverking Basin where Driftwood Creek begins its journey to the Pacific.

By the late 1960s, Audrey and I had been to Silverking Basin quite a few times before we had the kids. Once we had them, it became a little harder. Leroy was born in 1966 and Juanita in 1969 (Charmaine was still four years down the road). It then occurred to us that we could actually take the kids into the basin and stay for more than just the day. The first time we did that was in July 1970. Leroy was a three-year-old getting close to four. Juanita was a year-and-a-half old.

When my fellow CN employ Robbie Robinson found out what we were thinking, he volunteered to drive us into the basin with his 4-wheel drive. He also offered to pick us up later on in the week. Well, that was an offer we obviously could not refuse! So on a nice summer Monday morning, Robbie drove us into the basin. In those days driving a vehicle into the basin was allowed since the Babines were not even a Recreation Area. The road was muddy and bouncy but we made it into the basin in one piece.  Robbie said he’d pick us up again sometime on Friday. And so we moved into the cookhouse that was still habitable in those days. The cabin was built in the 1920s and was formally named the LaMarr cabin – after the beautiful and famous movie star Hedy LaMarr of the early 1900s.

Audrey, Leroy and Juanita at the cookhouse. 1971. 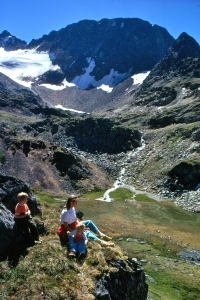 It turned out to be a beautiful week although that is not a word that we could use to describe ourselves. We agreed that Audrey wouldn’t fuss with her hair and I wouldn’t shave. All of us wore old clothes. So you can imagine that we were a rather forlorn looking bunch by the end of the week.

Everything worked out very well although Audrey was not happy about the mice that roamed through the cookhouse at will especially at night. The floor was of two-inch lumber and, over the years, the knots had dropped out of the knotholes and they had become just plain holes allowing easy access for the mice. The kids slept on the bunk at the back of the cookhouse but Audrey and I had to sleep on the floor. This meant that at night we could feel and hear the nice running over our sleeping bags. Not a situation to Audrey’s liking. 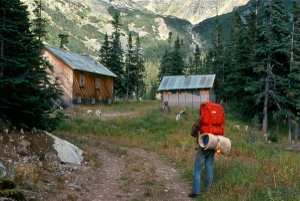 Lynn Shervill in Silverking – the bunkhouse and the foreman’s cabin. 1978.

We had considered moving into the big bunkhouse next door but seeing all of the mouse droppings on the floor and the even easier access the mice had there, we dropped that idea. For me, it wasn’t so bad. My family lived for sometime in a decrepit old log house in Barrett Lake, a haven for mice, and we discovered there that mice will run over you at the slightest opportunity but they will not touch the face of a living human being. I told Audrey this but she was not convinced nor impressed! The solution to the problem lay in the old garbage dump in the bush just behind the cookhouse. There were dozens of old rusty tin cans laying around with lids just the right size to cover the knotholes. In the bunkhouse, we found a pair of pliers, some rusty nails and a hammer. By the end of the second day, we had closed all of the knotholes and were now looking forward to a good night’s rest. We had just barely gone to sleep when we were awakened by the sound of “thumps in the night”. You could hear, quite loudly, metallic sounding thumps. Thump, a bit of silence and then thump again. Then the process repeated itself several times. Soon we were hearing thumps in three or four places on the cabin floor. It didn’t take us long to discover the source of the thumps. It was the mice trying to come up through the knotholes. You could practically hear them thinking, “I can’t figure this out, I’ve been coming through this knothole for years! What is happening here? Let me try it again!”  Thump…..! It was really quite funny but also very effective in keeping the mice out – and Audrey was happy.

We had a truly wonderful time. We hiked over Hyland Pass into Hyland Basin, we paid a visit to Fortunat L’Orsa’s grave and planted some flowers around it, we checked out the old mining adits, etc. The weather was great all week and we got totally relaxed though rather scruffy looking. So relaxed, in fact, that one day, while I was taking a picture of my crew, little Leroy suddenly blurted out, “Dad, there’s a man….!” In those days hardly anyone came into the basin so our intruder caught us completely off guard. It turned out to be Forbes Lee who was the Secretary-Treasurer of School District 54. We had not met before but as a result of that meeting we became good friends. Forbes explained that he tried to be as obtrusive as possible so as not to scare us but Leroy caught him in the act! He was the only person we saw for the entire five days!

True to his word, Robbie picked us up on Friday afternoon and drove us back home. When we arrived in town, it seemed to us that everyone was running around in such a hurry. We had become so relaxed that even the citizens of laid-back Smithers seemed to be in a perpetual hurry!

The following year, Joe L’Orsa drove us into Silverking again for, by now, we were totally hooked on the basin. We’ve been coming back there many, many times over the years always spending five days there. Even our grandchildren are now hooked on this beautiful basin. It has added a very meaningful dimension to our lives.

Lynn and Sheila at the Joe L’Orsa cabin with Harry. 2015.

Harry Kruisselbrink and Joe L’Orsa (more on him later) were two of the most important people in our introduction to the community and the Babine Mountains. Harry likes to tell of story of how he and Joe decided to befriend Lynn when he first arrived to work at the Interior News in 1976 because he wore hiking boots. Soon after, they took him into the mountains. And Lynn took me …