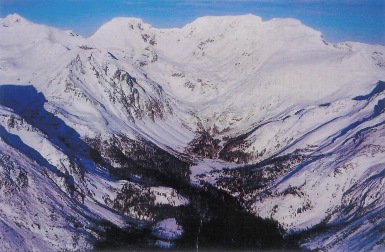 The concept of watersheds has long fascinated me, as the many posts about Driftwood Creek illustrate. Back in 1977 when I worked for a Terrace newspaper, a regional district staffer, Doug Aberly, suggested provincial programs be managed in integrated watershed districts rather than in the piecemeal way jurisdictions were and still are divided. Long before that, Indigenous nations  divided territories along geographical lines of watersheds rather than the methods used in Canada’s Dominion Land Survey system which created townships and one-mile square sections of land, completely ignoring the natural boundaries provided by creeks, rivers, and mountains.

Years later, I opened a play, The Height of Land, with the image of a woman squatting to pee (women’s attention is more focused on the ground between our feet at these moments) and wondering which way her urine would run – if she was in just the right place (like the Columbia Icefields) could her urine eventually reach three oceans?  A shift of inches could produce an entirely different outcome – a little like that butterfly flapping its wings in Beijing.

Then I took a geography course from Rick Trowbridge at what was then Northwest Community College. He showed us a short film that began with the image of a single drop of water splatting onto the ground. Whether it was soaked up, frozen, evaporated, or ran into the nearest stream, it eventually returned to the sea via one watershed or another. While the term height of land sounds as if it should stand out – a hill or mountain – it is often the opposite.  Think the country north of Prince George along the nine-mile Giscome Portage where the watershed shifts from the Fraser to the Peace (via the Crooked and Parsnip rivers). Nothing dramatic there. And Rose Lake just west of Burns Lake, the division between the Fraser and Bulkley/Skeena river basins. Again, hardly a hill in sight.

Lynn and I scrambled up above the cabins in Silverking Basin in 1977 on our first extended camping trip into the Babines. We fought the shintangle to reach the small lakes in the basin whose walls create one of the boundaries between those watersheds and also between Silverking and Grassy Mountain and the Twobridge (Reiseter) watershed. 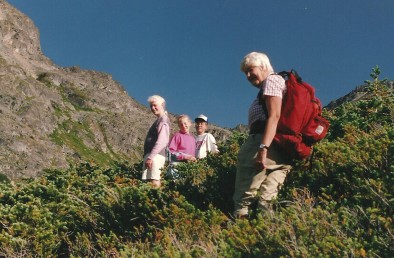 Our eldest son, Daniel, went with me and Gisela Mendel in 1991/2 on a weekend trip into the basin. We joined Frank Rhebergen and his daughters to climb up the shintangle again into the headwaters. We made it up onto the flank of Cronin and crossed over to the Hyland Pass Trail – a route we tried to do in reverse the summer before last. We didn’t succeed, so Don Parmeter very kindly gave me the beautiful aerial photograph at the top of this post. 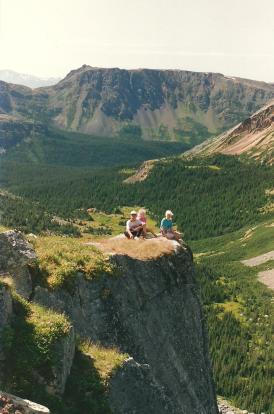 The kids with Silverking Basin and Harvey Mountain in the background. 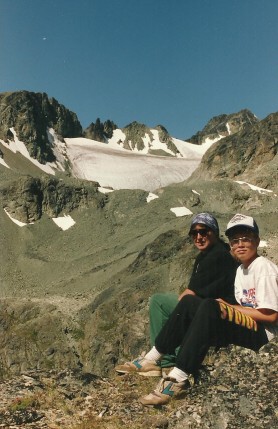 Me and Dan below the glacier. 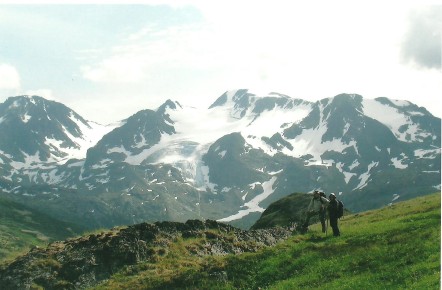 Lynn and Jim Pojar on Grassy Mountain, the Fulton side of the watershed divide.

All those watersheds draining into the Skeena Basin, into the Pacific Ocean.

And now we live right beside the same ocean. Here many creeks run straight to salt water without a river in sight. It’s a new kind of geography. For a river to get big, it needs to start far away from its final outlet. Once you think about it, it seems obvious, but coming originally from Powell River as I do, I didn’t really understand rivers. Powell River, the river that is, is one of the shortest in the world. Maybe that’s why I ended my novel, The Taste of Ashes, beside the Nautley River which drains Fraser Lake a mere 800 metres before it empties into the Nechako. Another “shortest” river. It felt something like home.